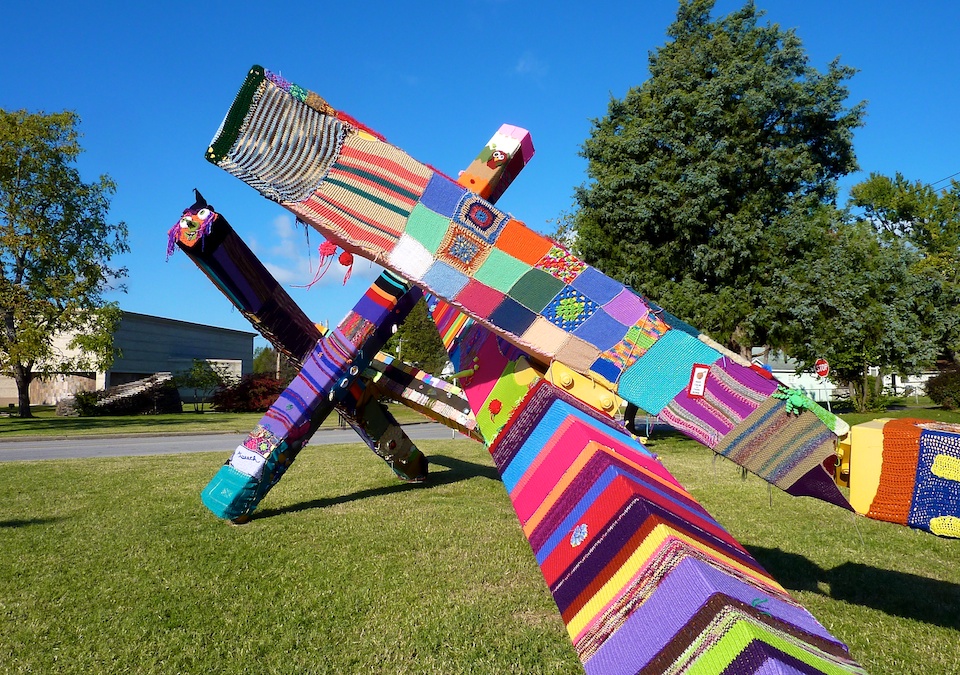 The YarnXBombers are an informal group of people who meet at the ideaXfactory to collaborate on yarn bombing projects. Yarnbombing is a contemporary form of street art or ‘yarn grafitti’ and a non-invasive way to temporarily add color, humor and art to urban and public environments.

After a successful installation project in conjunction with the January 2013 Sculpture Walk Forum, the Springfield Art Museum invited the YarnXBombers to return.

We proposed an installation for the Sun Target sculpture by John Henry at the National Avenue and Bennett Street approach to the Art Museum. Knowing it would be an ambitious project for our small group in a short time frame, we opened the project to public participation.

Because our core members have other professional careers, we have limited time to work on yarn bombing projects, but also extensive social networks from which to draw upon. The Art Museum also invited its patrons and supporters to participate.

To allow the most public participation, we decided not to restrict contributions in terms of color, shape or size. We invited people to experiment and create something new, or to search their closets for something already made or unfinished.

Yarn is a relatively inexpensive material accessible to most people, and so are the techniques. Crochet and knitting skills are handed down through generations, weaving and needle-felting taught in our universities, and do-it-yourself videos and tutorials are easily available on the Internet through YouTube and online communities.

In my own work, I am often inspired by anonymous antique patchwork quilts, finding spontaneity, humor and surprises often not seen in pre-defined designs.

Since we couldn’t attach anything to the sculpture with adhesives or other materials and could only use borrowed ladders for installation, we also had to develop a strategy for the physical construction.

As Wendy was crocheting a witch face for one of the high points, she developed a design for an ‘end cap.’ This is sort of like a square sock that could be pulled on the end of a beam and was used as an anchor to attach other pieces.

Big panels were pre-assembled to cover significant portions of each beam, but also to provide a base to attach smaller pieces that were donated or created on-site.

Promoting the project through Facebook and Instagram, we received donations through the mail from California, Wisconsin, Minnesota, Texas, and Sweden.  The art museum collected items, and we invited people to drop off items during installation weekend.

We also invited anyone to participate in the installation because we needed many hands to help hold and sew pieces into place. Some people showed up early and stayed to work all weekend. Others planned to just drop off a contribution, but became so engaged with the process that they stayed to help.

It’s hard to calculate the number of people who were involved in project. Many contributions were anonymous. Highly creative and distinctive elements are intentionally spread throughout the project to encourage people walk around and under the sculpture, viewing it from every side and angle. Following is a partial list of creators. I’m still working on a photo gallery of contributions that I’ll post soon.)

History of Yarn Bombing and our group

Yarn bombing started in 2005 when a shop owner in Austin knitted a cozy for the doorknob outside her shop. Because it seemed to attract people who took photographs, she continued with a cozy for a light post, then a street sign. Her photos on the internet went viral, and now you may find yarn bombing all over the world.

Our local YarnXBombers group starting meeting when the ideaXfactory opened downtown in November 2012. We started with a few people who liked to knit or crochet or wanted to learn. Sharing techniques and meeting socially created bonds that soon led to planning collaborative projects. I yarn bombed the trunk of small tree on Boonville Avenue and other sewed pompoms and flowers to the branches. We yarn bombed a bike, a mannikin, and road construction signs and hosted hands-on activities for First Night Springfield.

Our first public installation for the Springfield Art Museum was done in conjunction with a January public sculpture walk forum. We created a collaborative totem pole installation on the flagpole in front of the art museum and then wound a path of ‘drawings in yarn’ through the galleries of the art museum to lead people back to the meeting room. You can see the music video by Russ RuBert here:

Next we yarn bombed the Tumbler sculpture on Park Central Square for Valentine’s Day. We covered it in red and pink yarn, hearts, birds, bees, and flowers and invited the  kids that hang out on the Square to collaborate. You can see the video by Russ RuBert and music by Houston Hands here:

For the St. Patrick’s Day parade on Boonville, we yarn bombed the ideaXfactory corner column and also various light poles and a bike rack.

In June, we created performance art for the Pridefest March by knitting and crocheting a rainbow cape. Seven different people each made a different color stripes of the rainbow that were joined at the neck. At the other end, the stripes were detached and during the parade, each person continued to work while marching, showing that unity and community is a work in progress. You can see the music video here: Yarn Bombers make a Rainbow Cape in support of GLO Equality March

Most profound to me about this work of art, is the unit of construction. In my own work as an artist, I often sew and quilt layers with thread, which is a linear process to cover a three-dimensional object. I call it the ‘thread of thought’ – because each single stitch marks a moment in time, a thought, memory or daydream as I work. I feel the end result is covered with my thoughts.

Similarly knitting and crochet uses a single strand of yarn, manipulated and knotted using needles and hooks. As you look over the surface of the yarn-bombed sculpture, you’ll see not only evidence of the hand of the maker, but the thought. Each each piece was created by someone who choose color, pattern and texture, and worked it, a strand of yarn at time. Even what’s called machine knitting is woven from a single strand of yarn that was moved in a carriage by hand over a bed of of hooks.

Many people have asked us why we took the time and trouble to do this project. It’s combination of the challenge, the fun of making, and the community that develops from combined effort.

As with our other projects, we are immensely rewarded by the positive public response — the people who travel to see and photograph it, and the kids who like to touch and hug it. It’s a testament to creativity and grassroots community effort that we were able to completely transform the Sun Target sculpture into something else for a short time.

Special thanks to the Springfield Art Museum for allowing us to do this project and for giving us pizza for lunch. Also thanks to Russ RuBert for all his support, installation assistance and photographing this and all our projects.